Photomontages - The Most Unique Approach to Photography 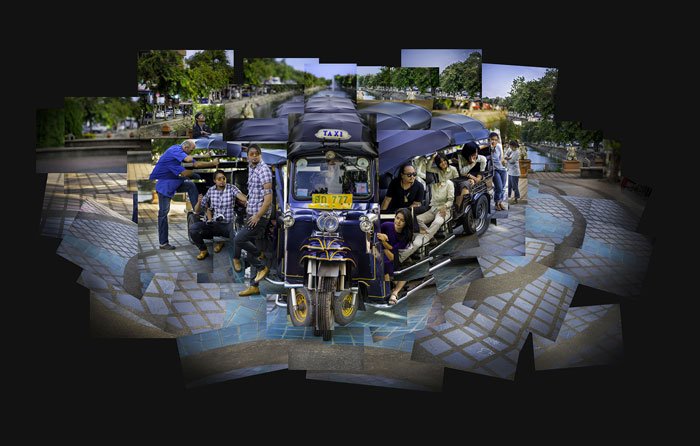 You may be wondering what photomontages are. This form of photography is more than a little unusual in many ways.

Photographs typically represent a single moment in time and conform their subject to two dimensions. Photomontages are a unique approach to photography, transcending these traditional boundaries.

Perspective with a single viewpoint is abandoned. Time constraints become elastic. Combining many photos into a single image of the same subject, photomontages enter the realm of Cubism.

Here’s a gallery showing some of my photomontages.

British painter, David Hockney, started making photomontages sometime in the early 1980s. He began with Polaroids, so all his photos had white borders. He then progressed on to using a 35mm film camera to make his photos.

Hockney was not a lover of photography, quite disdainful of it in fact. He makes this clear in his book ‘Hockney on Photography.’ Hockney used photography more as a tool than as a medium.

The diversity achieved by joining many photos together fascinated him. It gave him leave to explore time, space and relationships in new ways. He frequently makes references to the process of painting when talking about his photo joiners.

After buying my first camera I attended a short nightschool course on photography. This is where I saw a video of Hockney making a photo joiner. What he was doing captivated my attention. Sadly, the video is no longer online.

What David Hockney was doing in this video amazed me. At this stage in life, I’d only owned a camera for a few months. My enthusiasm for photography was fresh. This new way of photographing and compiling the pictures fascinated me.

Exploring My Own Creative Expression With Photomontages

Photomontages are the primary creative expression I have pursued as a photographer. This has been mostly separate from my professional photography work.

As my passion grew and my photography skill increased I dreamed of making it a full-time career. Before long I landed a job in a daily newspaper. I was an assistant in the editorial photography department. Since then I have worked primarily as a professional photographer.

Working in photography requires pleasing clients and/or editors with the pictures we take. Individual creative expression is often confined by outside demands. Making montages I maintain imaginative authority, even when producing them for others.

Several times the newspapers I worked for published my montages. I’ve produced them for commercial clients. They were also popular with wedding couples I photographed. Photomontages provided a unique artwork from their special day.

Creating montages forces me to think outside the box of traditional photography.

Single photographs can display an illusion of depth represented in two dimensions. By combining photographs into a montage the semblance of a third dimension becomes exaggerated.

Changing location as I make the photos for a montage means the resulting compilation of pictures will be fractured. They cannot be simply joined seamlessly as in a typical panorama photograph.

Photographing the Iron Bridge montage, I stood in three different locations. First to the left of the bridge, then to the right, and then in the middle. My intention was to show both sides of the bridge in the completed work.

The strong lines of the bridge made it possible to compile this piece using only seven photographs. Without distinct lines connecting the individual photos, a montage becomes confusing.

Sometimes photographing a montage doesn’t take me long at all. But this is unusual. Most often the process is time-consuming.

Developing the concept and planning its execution takes more time than making the pictures. The evolution of photomontages through the stages of compilation on the computer takes the longest time.

What I love most about time in montages is that I can stretch it. With a single photo, I am confined to a very short duration. Usually a fraction of a second.

Photomontages give me the freedom to play with time. When there’s any movement in a scene I can incorporate it creating the illusion of expanded time. 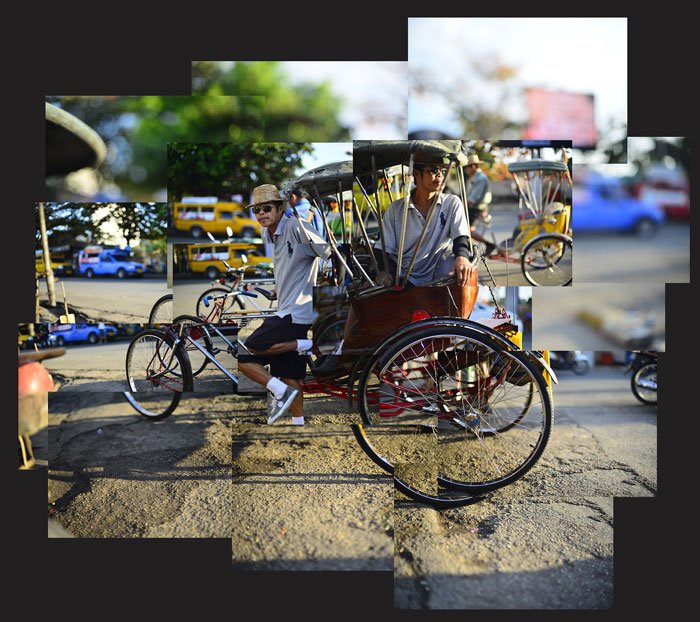 In one instance the rider is seated in his tricycle taxi on the right. To the left, in the same frame, he is stepping down onto the pavement. He has three legs and only one foot.

As with the fracturing of dimensions, the stretching of time must be treated with care. When I am photographing any progression I must stay with the action. I must capture the sequence as a full series of photos, even if I don’t end up using them all. They all are only segments of the whole scene and activity.

Putting together the pieces of any scene played out over time can be very challenging. I look to create a flow. The finished montage needs to be coherent.

Digital technology has allowed me to develop my montages beyond photography and into video as well.

I’d experimented briefly, exploring some possibilities. Before getting deep into this new and exciting genre I had been invited to be part of a large international exhibition to be held in Chiang Mai.

I exhibited three print montages and one video montage. My pieces were of some of the other contributing artists to the exhibition. They were all in Chiang Mai to produce their work for the show.

Producing this piece was very challenging. I knew it was to be publicly exhibited, so the pressure was on! I also had a deadline to meet.

My computer kept crashing as I entered the final stages, due to there being over 150 layers of photos and videos. This slowed me down and forced me to simplify the video montage somewhat. However, I managed to complete it on time. This montage attracted a lot of attention during the opening night, which drew the largest audience the gallery has ever seen.

My montages were also exhibited as a solo show, Fractured Dimensions, in 2014. I spent the longest and most concentrated time that year working on them. The exhibition was a huge success.

Since then one other gallery space exhibited them and now hang on the walls of our new home. Due to having built this home, I have not devoted so much time to producing new photo and video montages as I would like.

I do have one piece currently in production, the likes of which I have not tried previously. As we started building my wife suggested that I make a time-lapse montage of the house construction. So I am.

If you’ve enjoyed this article you may also enjoy reading more about how I make photomontages here.

I have also published a book about making photomontages. It’s available on Amazon.

1 thought on “Photomontages – The Most Unique Approach to Photography”