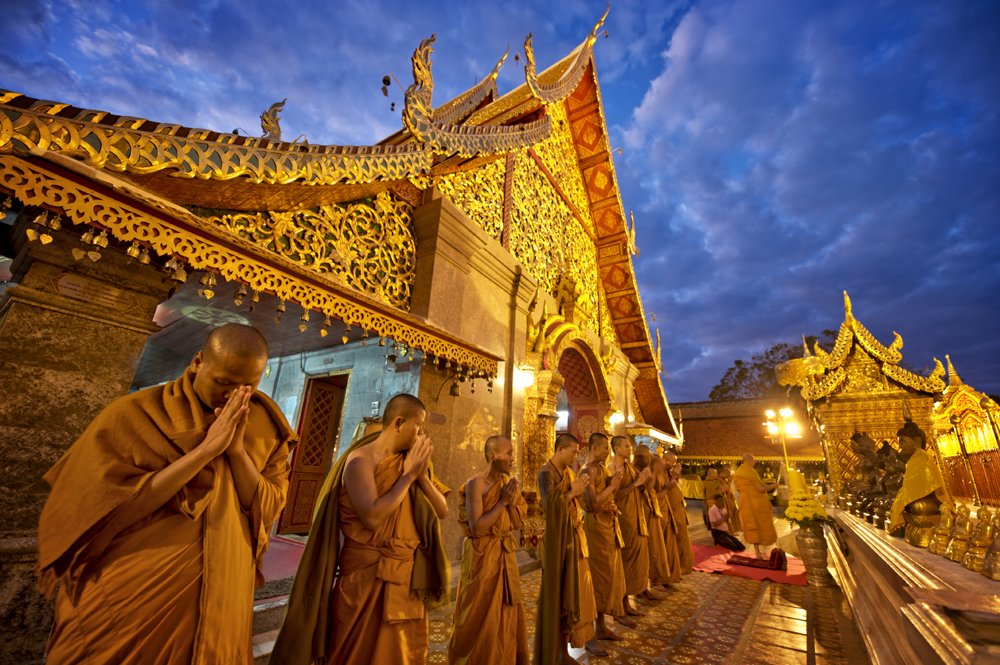 The ‘Blue Hour’ doesn’t last long in Chiang Mai. We get seven to ten minutes each morning and evening where the light is optimal for photographs.

Further from the equator the period of time the light is right expands, but not here. If you want a blue hour photo when you visit Chiang Mai, or anywhere in this part of the world, you better be set up and ready.

One evening in mid-December I took a visitor to the temple on Suthep mountain which looms over the city of Chiang Mai. We spent the late afternoon there and early evening. As usual, it was busy with tourists and locals coming to make merit.

From experience, I knew that after sunset the crowds would thin out and the light would change. The light is so harsh up there during the day I only ever go early in the morning or later in the day. The Chiang Mai blue hour is really short, but worth the trip up the mountain to experience.

Photographing the people and architecture I was killing time waiting for the light. I asked one of the monks what time they switched on the lights for the chedi. He told me 6 pm. So I waited.

I’d borrowed a 14mm – 24mm lens from a friend for the day to give me a different perspective on the temple. I’d photographed at the location many times before, but my widest lens was only 20mm.

I set up on my tripod at one corner, positioning the camera to photograph the magnificent gold-colored chedi. Once the lights came on I would take my exposure from the chedi and continue waiting. As the ambient light dropped, the sky would darken. At the right time, for about seven to ten minutes, the sky would render a rich blue color in my images.

The lights were flicked on just before six. And the monks lined up facing the chedi for their evening prayers. I had forgotten this happened each evening at the same time.

Mid-December, at around 6pm the ambient light just happens to be optimal, balancing with the electric light, to capture a rich blue sky.

Swinging my camera round and adjusting my tripod slightly I was able to compose the line of monks in front of the temple building. I made my exposure reading from the robes of one monk and set my aperture, shutter speed, and ISO.

Shutter Speed: ⅓ of a second

My position and timing were good. Had I been on the other side or further back I would not have avoided tourists in my frame. I knew I had less time than the light would be good for. The monks would finish and disappear inside the temple again, so I worked quickly.

I was reluctant to push my ISO higher to avoid digital noise. In hindsight I could have taken it up higher than 100 to allow for a faster shutter speed, reducing the risk of motion blur in the monks. However, in this frame the blurring is minimal.

After capturing enough frames of this view I panned my tripod head around and attempted to capture some of the chedi in the frame with the monks. The lens was wide enough, but, sadly, the light reflecting off the gold surface of the chedi was far too strong to make a balanced exposure. I was already satisfied, the ambient light had dropped too low, so I called it a night.

If you’ve enjoyed reading this post you will also enjoy “Street Movement Portrait.”